In 2018, the United States and Canadian jurisdictions. The Commercial Vehicle Safety Alliance (CVSA) unexpectedly organized 11,531 roadside commercial motor vehicle inspections on April 25, 2018, Brake Safety Day. Out of those 11,531, approximately 1,595 were removed from the road because of brake violations.

The United States and Canada gathered the following statistics:

The CVSA conducts brake inspections during the year to help find and remove vehicles that are operating with brake issues. These inspections help lower the number of commercial vehicle-related accidents.

By conducting the Brake Safety Day, more drivers, mechanics, and owner-operators are educated about the significance of brake inspection, maintenance, operation, and safety.

CVSA will conduct a Brake Safety Week from September 16 – 22, 2018 in all participating jurisdictions in North America. As the Brake Safety Week approaches, be sure your truck measures up to the CVSA inspections.

Read these inspection levels to ensure your truck is kept on the road during Brake Safety Week.

During the Level I inspection, inspectors will examine your driver’s license, medical examiner’s certificate, and skill performance evaluation certificate. Inspectors evaluate the driver to ensure you are not under the influence of drugs or alcohol. Your driver’s record and hours of service will be checked along with seat belts, and vehicle inspections. Vehicle inspections include:

* Note: If there is more than a 20 percent pushrod travel that cannot be measured, the inspection would then be a Level II inspection.

* Note: Under the 20 percent brake standards – five-axle vehicles with a combination of one axle that is not measured will need two defective brakes to receive an out-of-service order.

During a Level II inspection, an inspector examines everything in the Level I inspection. You can expect that the walk-around driver/vehicle inspection includes items that can be inspected without getting under the vehicle.

Level III inspections include examining the:

Inspections under the Level IV – Special Inspections includes a one-time exam of one specific item. This provides something that was conducted during a study or to confirm or contest a suspected fad.

In a Level V inspection, this is where an examiner inspects a specific item under the Level I – North American Standard Inspection when the driver is not present and at any location.

Level VI is an inspection for radiological shipments which includes the Level I Inspection, radiological requirements, and the North American Standard Out-of-Service regulations for Transuranic Waste and Highway Route Controlled Quantities for Radioactive material.

On January 1, 2005, commercial vehicles and carriers that carried HRCQ of radioactive material were controlled by the United States Department of Transportation (DOT) and it is mandatory that the vehicle passes the North American Standard Level VI Inspection.

A Level VII is an inspection that is required for a jurisdictional mandated inspection program that does not meet the criteria of any other level inspections. An example of this would include:

The inspections are performed by the CVSA-certified inspectors, government employees or jurisdiction-approved contractors.

Before hitting the open road, be sure your truck is operating correctly by conducting a pre-trip inspection. Your truck should meet all the requirements under the Commercial Vehicle Safety Alliance Inspection guidelines. Pre-inspections reduce time spent for out-of-service restrictions and gets you back home to your family quickly and safely. 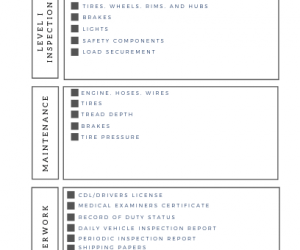 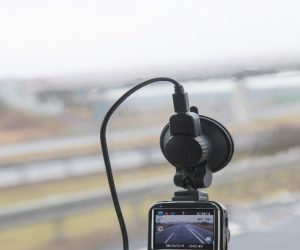 As new technology continues to be developed, the trucking industry is benefiting from life-saving options. ...
Read More