In the trucking industry, we begin to reflect on the different changes that occurred in 2018. The electronic logging device (ELD) mandate, Hours of Service, along with the various modifications that truckers had to take with these new regulations. With President Trump’s administration still in office, there are still some rules and regulations that have not gone into effect. However, the trucking industry is going to see some changes surface in 2019. Below are some of the new Federal Motor Carrier Administration (FMCSA) regulations instore for 2019.

The well-known ELD mandate went into full effect on December 17, 2017. However, some commercial vehicles that were still using the Automatic On-Board Recording Devices (AOBRDs) were excluded from this new ELD rule. However, those fleets still using AOBRDs were expected to switch to the new ELDs by December 17, 2019. Fleets still have time to make this change, but some are a little worried. Some small truck carriers saw their productivity decrease when they switched to ELDs, and now larger truck carriers worry they may have the same issue.

The FMCSA announced the deadline for the switch to ELDs along with requirements for truck carriers who decide to continue using AOBRDs until the deadline approaches.

Many truck drivers announced that their problem with the new ELDs were more issues with their Hours of Service (HOS). The drivers were able to be heard directly by the FMCSA in March of 2018. A few months later in August, the FMCSA asked drivers for their opinion regarding the HOS requirements and rules including split sleeper berths and rest breaks. It is said that truck drivers can see some changes in the next few months.

The changes for HOS have two different sides that are being presented to the House. These include:

With the new minimum wage raising, the Truckload Carriers Association (TCA) is telling truckers to be mindful of the new requirements that have taken place in many states in 2019. The legal counsel from TCA states, “Employers with operations in different states must take care to monitor these various state law requirements, and when they change. This is significant for the trucking industry because carriers are often targeted with wage and hour lawsuits brought by drivers and other employees.”

With DOT drug and alcohol testing, this has already eliminated some individuals wanting to pursue a career in the trucking industry. However, now two drug testing guidelines could remove even more potential drivers. All trucking industries are to be in full compliance with the new Drug and Alcohol Clearinghouse by January 2020. The new clearinghouse rule has already been approved but is on hold due to the Department of Health and Human Services needing to set guidelines regarding the hair testing before DOT can follow through with the regulation. This new rule will require employers to examine the clearinghouse record for any alcohol or drug violations before proceeding with a pre-employment screening and annual confirmation.

After the Department of Human Services releases the new guidelines, the transportation funding bill requests that the FMCSA issues a rule to allow hair follicle testing to be an adequate substitute to urine drug testing. As of now, the urine drug testing is done on potential truck drivers which can identify drug use within the past days. However, hair follicle testing can identify drug use up to 2-3 months in the past.

Sleep apnea is a serious concern for many truck drivers. Those who do suffer from sleep apnea are more prone to a vehicle accident. The FMCSA and FRA (Federal Railroad Administration) announced a rule for the sleep apnea in March 2016. The National Transportation Safety Board (NTSB) did advise that there will be a higher degree regarding sleep apnea testing. Following the recommendation, in August 2017, FMCSA and FRA chose to discontinue a regulation requiring sleep apnea treatment and testing for truck drivers and all other transportation employees.

National Highway Traffic Safety Administration (NHTSA) and FMCSA in August 2016 issued a rule regarding speed limiters for commercial trucks. The rule was to require that all commercial trucks have a speed limiter device. Even though the rule has been outlined, but the top speed has not been decided on. The following speeds have, however, been discussed – 60, 65, and 68.

Along with all the above regulations coming in 2019, you must take the initiative to keep informed on any and all new regulations. Stay safe on the road and be prepared. 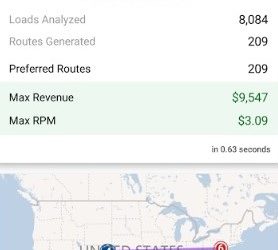 Landstar has rolled out another mobile application targeting owner-operators and Business Capacity Owners (BCOs). This app will...
Read More