March is not just known as spring showers, but instead as Women’s History Month. In March, we celebrate the strong women who have carved the way for many other women in the trucking industry. Women make up a significant number of our drivers. 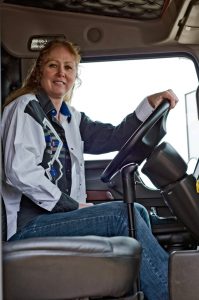 Below we will share the importance of women truck drivers and the history of women in the trucking industry who has made an impact in the industry as we know it today.

Why Women Are Important to the Future of Trucking

Trucking is important and high in demand career choice. While the shortage of drivers will be one of the biggest encounters we will have, the importance of drivers remains. According to a 2019 report from the American Trucking Association (ATA), the trucking industry saw a shortage of about 60,000 drivers in 2018. That is approximately a 20% increase from the prior year of 50,000. According to ATA, if we keep the same momentum, we can see a shortage of 160,000 by 2028. The trucking industry will need to hire about 1.1 million new drivers by the next decade to see industry growth. That is approximately 110,000 drivers a year.

The ATA also states that replacing drivers who are ready to retire will be over half of the new drivers – about 54%.

To stop the shortage and accommodate industry growth, the trucking industry will need to hire roughly 1.1 million new drivers over the next decade — an average of nearly 110,000 per year. To see growth, the industry needs to see more woman drivers ready to begin a trucking industry career. As of now, women drivers make up about 7% of all drivers today.

While trucking can pose a risk, there are also opportunities to succeed and make a successful career out of trucking. When leasing with the right carrier, you can be successful as an owner-operator and run your own business.

Why Begin a Career in the Trucking Industry?

There are many benefits to becoming an owner-operator. One benefit that many drivers speak of is having your own independence and being able to travel. When you are an owner-operator with a non-forced dispatch company, you can have a flexible schedule and make your own hours.

There are many trucking groups and networks for women to reach out to and build unity in what seems like a male-ran industry. Some women groups include Women in Trucking Association, Real Women in Trucking, and S.H.E. Trucking.

Women Who Have Shaped the Trucking Industry

While driving a truck is often thought to be a “man’s” career, many women have stepped up and played an important role in this industry. Below are some women who have shaped the trucking industry in the United States and made it what it is today:

Alice was just 22 years old when she because the first woman to drive coast-to-coast in 1909. Alice Ramsey went on and founded the Women’s Motoring Club.

Luella Bates began working for the Four Wheel Drive Auto Company in 1918 as a test driver during World War I. Luella drove the Model B truck and continued after the war as a driver and demonstration. In January 1920, Luella Bates was the first woman to get her driver’s license in New York. Later that year, the Four Wheel Drive Auto Company sent Luella Bates around the country to show other women that they can drive trucks. Bates was then the poster child for women truck drivers during this era.

In 1929, Lillie Elizabeth Drennan got her Commercial Driver’s License (CDL). Later, she decided to start her own trucking company known as Drennan Truck Line. Lillie had a hearing impairment that just about stopped her from getting her license. But she fought her case against “sex bias” and was granted her CDL.

Mazie Lanham was the first woman to drive for UPS in 1943. During this time, Lanham started a trend of hiring women for these jobs because there was such a shortage during World War II. This continued even after the war.

Celebrating Women All Around the World in the Trucking Industry

This is the month to celebrate all women, especially those who work hard every day in trucking, and show our respect for their hard work and evolving the industry.

We are an equal opportunity company, and we would love both men and women to join our 100% non-forced dispatch team.

You can apply today and learn how to further your career in trucking.

Thank you to all the women drivers out there for all your hard work and dedication. We see you, and your dedication does not go unnoticed.

What are the vacation policies at Landstar? How many days are given for vacation per year?

What benefits does the M.U.S.T Program offer?

Being involved in the M.U.S.T Program has many benefits. These benefits include: Lower shipping costs for the custome...

How does Landstar ensure safety to customers?

The M.U.S.T Program was first introduced to help Landstar’s safety team, and customers ensure safety for the driver and shipper....

The Landstar Contractors’ Advantage Purchasing Program is offered to all owner-operators to help with discounts on tires, fuel, ...

Does Landstar aid with truck and trailer insurance?

Yes. Landstar does help owner-operators with insurance for your truck and trailer....

What are the vacation policies at Landstar?

Are there requirements on how long a driver must stay out on the road?

At Landstar, we are 100% non-forced dispatch. This means you can take any type of load you want, and you can return home at any po...

Does Landstar offer BCOs help to save money on fuel?

Landstar offers the Landstar Contractors’ Advantage Purchasing Program (LCAPP) to all Landstar BCOs to save money on their fuel ...

What driver support does Landstar offer their drivers?

Building strong, reliable, and long-term relationships is what makes Landstar the trucking success that we are. At Landstar, we pr...

What are the minimum tractor or trailer equipment requirements at Landstar?

Does Landstar Lease on Team Drivers

How many miles is considered OTR experience?

To have the OTR driving experience truck drivers must have at least a 500mile radius one-way trip and have snow and ice drive expe...

Can a fleet owner with Landstar manage a fleet of drivers?

Yes, when signing up with Landstar trucking industry as an owner operator you can be the fleet owner. However, if you are not a tr...

What are the benefits of Landstar?

If you lease with Landstar trucking company, the benefits are: Landstar pays the cargo insurance, you’ll have opportunity to boo...

Do I need to own my own truck to work for Landstar?

To sign on with Landstar trucking company as an owner operator, you will need to have your own truck. However, if you do not, you ...

What are the Landstar driving requirements?

If an owner-operator is employed with Landstar trucking company, they would need to meet all the minimum requirements. Once these ...

We are 100 percent Non-forced Dispatch, employees have the opportunity to have flexible schedules and can pick their loads and cho...

What is the Landstar age requirement?

To become an owner operator, independent contractor, or a commercial driver with Landstar trucking company you must be at least 23...

Is Landstar responsible for a trailer?

Landstar trucking company pays the insurance, upkeep and maintenance on the trailer. There is no rental fee for leasing a van. How...

Would a 2005 Freightliner be acceptable to haul for Landstar?

Does Landstar trucking company use electronic logs or paper?

Yes, Tractors must be capable of functioning with Landstar-approved Electronic Logging Devices (ELDs)....

What are the Landstar region rules?

With Landstar as an owner operator you can run regional. Keep in mind Landstar trucking company is non-forced trucking industry. T...

What states does Landstar hire owner-operators for trucking jobs?

Landstar is hiring owner operators and truck driver teams for all 48 states including Canada and Mexico....

What states does Landstar run in?

Landstar has owner operators running in all 48 states including Canada and Mexico....

How long is the employee orientation process?

The orientation program is the last training session to becoming a Landstar BCO. This 2-day event runs Monday, Tu...

What is the Landstar age requirement on truck and trailer?

There is no age restriction on the tractor; it must pass a Landstar certified DOT inspection. Also, Landstar Trucking Industry has...

Can I get plates, truck insurance, and accidental work injury insurance through Landstar?

Landstar trucking industry does have prepass; it’s around 7 dollars a month. Tolls are the responsibility of the owner operator....